A Quick Paycheck Protection Program Refresher bring everyone up to speed, a quick refresher. 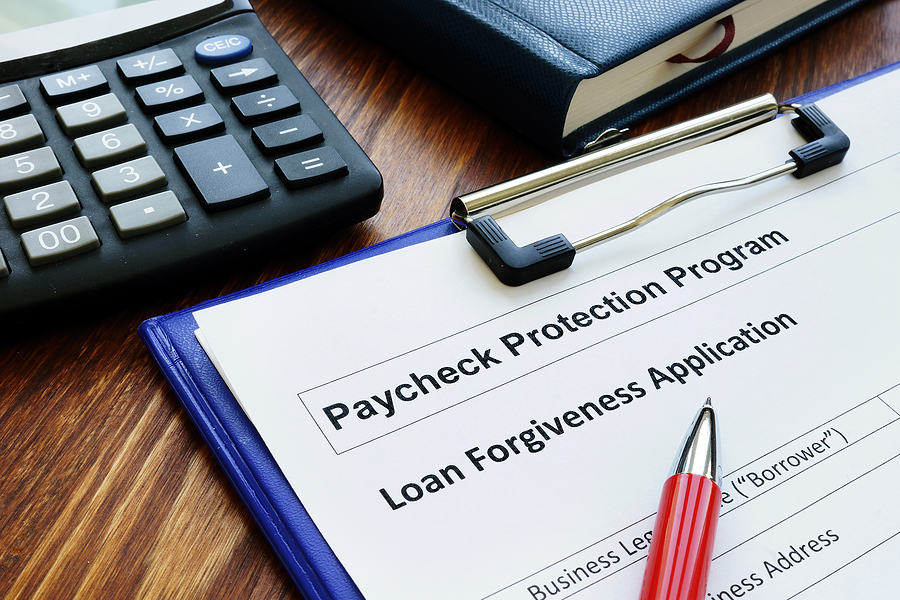 A Quick Paycheck Protection Program Refresher bring everyone up to speed, a quick refresher.

If your small business was slammed by the Covid 19 crisis, you theoretically could obtain a “paycheck protection program” loan-a PPP loan-equal to 2.5 times your monthly payroll. If your monthly payroll runs $40,000, for example, your PPP loan amount might be $100,000.

Payroll by the way included not just wages but employee benefits, state payroll taxes, and the business owner “compensation replacement. “And the other part of this: If you spend the loan proceeds on payroll, rent, interest and utilities over the eight weeks that followed you receiving the loan? Bingo. The Small Business Administration forgives the loan.

The following situations will limit your loan forgiveness:

The PPP loan forgiveness formula makes a small business eligible for total forgiveness. You just need to spend the loan proceeds on payroll costs, interest, rent and utilities over the eight weeks that follow you receiving the money. However, the Section 1106 statute makes two adjustments to the initial “eligible for forgiveness” amount.

that if you reduce the headcount of full­ time equivalent employees, that percentage reduction reduces the initial “eligible for forgiveness” amount.

For example, say your firm had spent a total of $100,000 on payroll, interest, rent and utilities. But say you had reduced your headcount by 20 percent. In this scenario the “adjusted for headcount reduction” loan amount drops by 20 percent to $80,000.

One other thing to note: The headcount adjustment lets a business choose which period of employment it looks back at to calculate a reduction in workers. A firm can compare its current employment to employment from February 15, 2019 through June 30, 2019 or to employment from January 1, 2020 through February 29, 2020.

The PPP loan forgiveness formula includes another adjustment, too, from Section 1106(d)(3)(A).

After the formula adjusts the initial “eligible for forgiveness” amount for any reductions in headcount, it looks for any reductions in employee pay rates in excess of 25%. Note that the formula ignores pay rate reductions for employees who earned more than $100,000 (on an annualized basis) in 2019. But for everyone else, a pay rate reduction in excess of 25% further reduces the amount available for forgiveness.

Suppose a firm reduces the pay rate for one employee from $8,000 to $2,000. Perhaps this employee earns a sales commission, for example. And the bad economy just destroys sales for a few months.

And then a pay rate reduction like that described in these paragraphs would decrease the loan forgiveness amount by another $4,000 to $76,000.

Missing the Rehire Window of Opportunity

The Section 1106 statute includes a couple of mulligans.

The first mulligan? Per the statute and a forthcoming interim final rule, if a firm either rehires or attempts to rehire employees it laid off sometime after February 15, 2020 and before April 29 ,2020 it avoids a reduction in the initial “eligible for forgiveness” amount due to an earlier reduction in your headcount. To avoid the reduction in forgiveness by rehiring, a firm needs to rehire the employee by June 30.

To avoid the  reduction in forgiveness by attempting to rehire, a firm needs to  make “a good faith, written offer” to rehire the same employee by June 30 at the same pay rate and for the same number of hours and then document the employee’s rejection. Note, too, that if even a firm can avoid reducing the initial “eligible for forgiveness” amount by rehiring or attempting to rehire, such a firm calculates a   smaller initial “eligible for forgiveness” amount.

For example, say a firm average $40,000 a month in payroll during 2019. As a result, it receives a $100,000 loan. Assume, however, that the firm laid off its entire workforce before receiving the PPP loan and can’t rehire them until June 30.

Because the firm rehires employees by June 30, it avoids the headcount reduction adjustment. But without employees on the payroll during April, May and June, it lacks payroll costs to plug into the initial “eligible for forgiveness” amount.

If a firm reverses a reduction in salaries or wages by June 30, that reversal eliminates the requirement to reduce the initial “eligible for forgiveness” loan amount for pay rate cuts in April, May and June.

Again, though, note that the pay rate cuts themselves should reduce the payroll costs that plug into the formula.

For example, suppose a firm with ten employees making $1,000 a week cuts people’s wages to $500 a week. If the employer reverses the wage cuts by June 30, the wage cut adjustment doesn’t need to be calculated. The firm doesn’t need to calculate that a $500 per worker reduction is $250 more than a 25% decrease, for example. And then it doesn’t need to tally up these excess wage reductions and subtract the total from the initial “eligible for forgiveness”   amount.

But the 50 percent cut in wages means the firm pays 50 percent less payroll.

Tax accountants will tell you that taxpayers often lose audits only because they lack good documentation. Something similar, surely, will happen with the PPP loans. The statute requires a borrower to provide rich, detailed, high quality documentation. Here’s the actual list from the law:

But mark my words, many small business owners won’t be able to provide this detail. And in that case? The statute says they lose forgiveness. To quote the actual text of the law, “no recipient shall receive forgiveness without submitting the documentation required.”

One other thing to consider about documentation, too. The Section 1102 statute-the main law that creates the paycheck protection program-requires you to use the PPP funds for the approved purposes. Very possibly some small businesses will spend enough money on the appropriate expenses (payroll, rent, interest and utilities). But then lack the ability to prove the PPP loan funds provided the money that got spent.

Note that the formula ignores pay rate reductions for employees who earned more than $100,000 (on an annualized basis) in 2019.

But for everyone else, a pay rate reduction in excess of 25% further reduces the amount available for forgiveness.

Suppose a firm reduces the pay rate for one employee from $8,000 to $2,000. Perhaps this employee earns a sales commission, for example. And the bad economy just destroys sales for a few months.

If a small business started out with an initial “eligible for forgiveness” amount equal to $100,000, a 20% reduction in headcount might reduce that $100,000 to $80,000.And then a pay rate reduction like that described in these paragraphs would decrease the loan forgiveness amount by another $4,000 to $76,000.

The statutes passed by Congress say you can receive forgiveness if you spend the money on payroll, rent, interest and utilities. The Treasury and the Small Business Administration refined this however and say in the Interim Final Rule that non-payroll costs can’t represent more than 25% of the loan forgiveness amount. You can read this requirement two ways. But the friendly way to read this rule goes like this…

You received a $100,000 loan. Due to state mandated closures, you could only spend $60,000 on payroll during the eight weeks the PPP loan forgiveness formula considers. You also spent $40,000 on rent, interest and utilities. You might think you’re okay in this situation. But you won’t get forgiveness for the entire $100,000. Even though your spending all counts as valid use of the PPP loan funds.

Failing to Spend at Least 75% on Payroll-Costs Rule

Scattered through the Interim Final Rule just referenced, you also see (repeatedly) the phrase, “at least 75 percent of the PPP loan proceeds shall be used for payroll costs.” What this means isn’t clear to me. For example, is this the same thing as what I describe in above?

Or does this mean something different? For example, does it mean that if you borrow $100,000 but then for whatever reason only spend $60,000 on payroll costs, you lose forgiveness? I flip-flop in my assessment of this. But you probably want to consider the possibility you lose forgiveness in this situation.

If you read through the Interim Final Rule, the language seems clear,

… the Administrator believes that the finite appropriations and the structure of the Act warrant a requirement that the borrowers use a substantial portion of the loan proceeds for payroll costs, consistent with Congress’ overarching goal of keeping workers paid and employed.”

This discussion then goes on and makes the statement that the Secretary of the Treasury and the Small Business Administrator have decided that “75 percent is the appropriate percentage.” Further, the discussion notes that this limitation on the use of funds “will help ensure that the finite appropriations available for these loans are directed toward payroll protection.” And something else. Within this rule, two statements appear in proximity.

As explained above, not more than 25 percent of the loan proceeds may be used for non-payroll costs.

As explained above, not more than 25 percent of the forgiven amount may be for non-payroll costs.

I don’t believe that these two statements are equivalent. Accordingly, I will not be surprised if spending less than 75 percent on payroll eliminates the forgiveness.

If you inadvertently received a PPP loan much larger than you should have, stay especially alert to this.

Say, for example, that your PPP loan application erroneously treated amounts paid to 1099 independent contractors as wages. People understandably made this mistake. Early guidance lacked clarity. In this case, however, you received a far larger loan than you should have. And you may find it impossible to spend 75 percent or more on payroll.

For individuals with self-employment income who file a Schedule C, the Administrator, in consultation with the Secretary, has determined that it is appropriate to limit loan forgiveness to a proportionate eight-week share of 2019 net profit, as reflected in the individual’s 2019 Form 1040 Schedule C.

This is because many self-employed individuals have few of the overhead expenses that qualify for forgiveness under the Act. For example, many such individuals operate out of either their homes, vehicles, or sheds and thus do not incur qualifying mortgage interest, rent, or utility payments. As a result, most of their receipts will constitute net income. Allowing such a self-employed individual to treat the full amount of a PPP loan as net income would result in a windfall. The entire amount of the PPP loan (a maximum of 2.5 times monthly payroll costs) would be forgiven even though Congress designed this program to limit forgiveness to certain eligible expenses incurred in an eight-week covered period. Limiting forgiveness to eight weeks of net profit from the owner’s 2019 Form 1040 Schedule C is consistent with the structure of the Act, which provides for loan forgiveness based on eight weeks of expenditures.

To my way of thinking, you want to unbundle the PPP loan thing from the forgiveness formula thing.

Think about the loan as a loan, pure and simple. And if you need a loan, the PPP loan works great. Well, except for the goat rodeo element to applying. But other than that, the PPP loan may provide inexpensive flexible financing that helps you get through an almost unimaginably rough patch.

The forgiveness thing? Consider that icing on the cake. If you get some or a bunch of forgiveness? Great. Count yourself fortunate. But don’t bank on forgiveness.